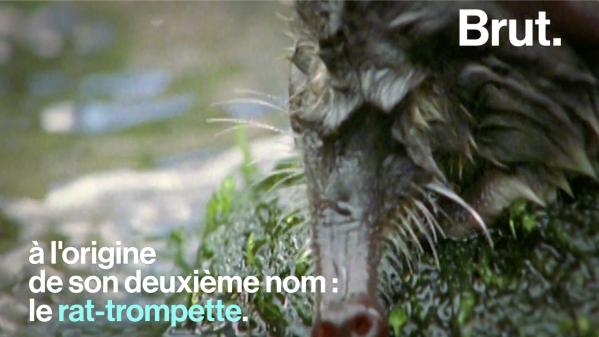 The desman of the Pyrenees also called rat-trumpet is endemic to the mountain range of southern France and the northwest of the Iberian peninsula. It is recognizable thanks to its hairy and mobile trunk, a particularly sensitive organ which allows it to be located in space, both on land and in water. This trunk is also what makes it easier to spot its prey such as aquatic larvae or insects carried away by the current.

The trumpet rat is very difficult to observe: it weighs between 50 and 70 grams, it is very discreet and is especially active at night. Many mysteries remain as to certain aspects of his behavior.

In 25 years, the species has seen its range decrease by almost 60%. The animal is in particular threatened by the pollution which poisons its prey. Added to this is the construction of facilities such as bridges and dams, but also the predation of animals such as cats, otters and mink. The population of the trumpet rat being fragmented today, there is also a risk of inbreeding.

After 6 years of study, the LIFE + Desman program has brought several possible solutions such as improving connectivity between the various watersheds, improving water quality and reassessing the conservation status of the species to move it from « vulnerable » to « endangered ».