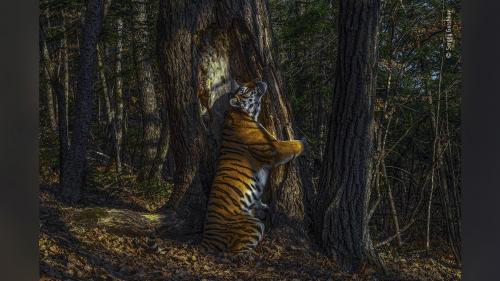 Sergey Gorshkov has been awarded the Wildlife Photographer Prize 2020 from the Natural History Museum in London.

The price Wildlife Photographer for the best wildlife photography of the year was awarded Tuesday 13 October by the Natural History Museum in London to Russian Sergey Gorshkov for his photo « The Embrace », an image showing a Siberian tigress hugging a conifer in the ‘Eastern Russia.

It took photographer Sergey Gorshkov over eleven months to capture this moment with hidden cameras. Writer and editor Rosamund Kidman Cox, chair of this year’s Wildlife Photographer jury, describes « low, wintry sunshine that highlights the ancient fir tree and the enormous tigress mantle as she grips the trunk in obvious ecstasy and inhales the scent of the tiger on the resin, leaving her own mark as a message. A unique glimpse of an intimate moment in the heart of a magical forest. «

Frank Deschandol, from Le Havre, was crowned photographer of the year in the « invertebrates » category for a photo of cuckoo wasps taken in 2019 in the bay of the Seine.

Specializing in macro photography, he explained to France Bleu Normandie that due to the speed of the insects, he was forced to develop a « specific material ». « Luck did the rest », he says since two species have appeared « in the sharpness zone », which makes it so rare. Frank Deschandol wins a reward of 1,250 pounds, or nearly 1,400 euros.

Gardois Quentin Martinez won him an honorable mention in the « photojournalism: unique shot » category for a photograph illustrating the bushmeat trade in Indonesia. And Montpellier’s Laurent Ballesta is hailed for two photographs in the « underwater » category.

Originally created by BBC Wildlife Magazine in 1965, then called Animals, the competition as it stands today was taken over in 1984 by the Natural History Museum in London. This year’s winners were selected from over 49,000 photos from around the world. Aimed at photographers of all ages, nationalities and abilities, the next competition will be open for entries on Monday, October 19, 2020 and will include important new categories focused on the impact of people on the planet.