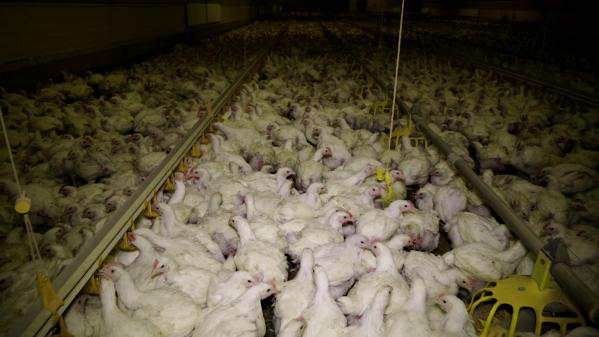 The L214 association denounces in a new video the conditions of collection, considered violent, of chickens in a farm in Yonne, France Bleu Auxerre reports Thursday, November 19. In the video, shot in September, a breeding site of the Duc group whose head office is located in Chailley in Yonne is singled out.

The site has 25,000 chickens, sometimes picked up with violence. One of the employees confides in a video produced by the association: “The job of a poultry collector is violent in itself. The goal is to go very quickly, to collect five chickens at once and slam them into a plastic crate. We don’t have time. put them down. We collect four to five chickens per hand. When we lift them, we hear the legs breaking, we hear the chickens crying. And we put them in the crates anyway. «

In addition to the collection conditions questioned, the images of the association also show employees working without a gown, gloves or mask. According to one of the employees who speaks in the video, labor law is not respected either: « I have worked for more than a month and still have not received an employment contract. »

Solicited by France Bleu, the Duc group did not follow up. For L214, the chicken manufacturer cannot ignore these facts: « An INRA study [Institut national de la recherche agronomique] already showed in 2009 that the manual collection of chickens causes dislocations, fractures, hemorrhages « , explains Brian Mordasini, in charge of agrifood relations within the association. « In other words, injuries for 30% of the chickens collected. »

The association for the defense of the animal cause is online this Thursday a petition asking poultry manufacturers to change their conditions of breeding and collecting chickens.